What if the universe was always there ?! 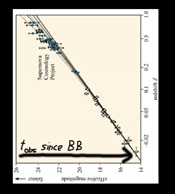 What, if the universe was always there and has been  only subsequently filled with materia created at big bang. So Hubbles law does not apply because the universe itself does not expand at all but only the materia and galaxies are moving in the Universe and the only thing we can say is that the speed of galaxies away from us has reduced over time?! Maybe thats a weird idea too, but not weirder than dark energy and never ending acceleration thus  contradicting relativity theory as it must lead in the future to speeds faster than light breaking up all ties of gravitiation, light and information between the galaxies in our Universe!

Hi Sani, great that you like it . kind regards Peter

Thank you for the wonderful and educative information and pictures

Now I understand Thanks